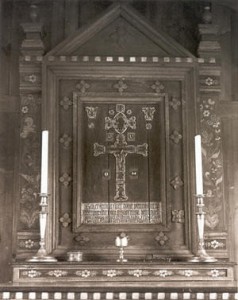 There has been a church at Tungufell at least since 1200.  In olden times Tungufell church was dedicated to St. Andrew.  The estate of Tungufell was of average size, and it appears to have been used as „small change“ in property dealings between wealthy landowners, both before and after the Reformation.  In 1679, Bishop Brynjólfur Sveinsson of Skálholt (1639-1674) subdivided the estate of Tungufell to create the farm of Jaðar, giving the church in exchange a chalice and paten, which are still in use in the church.

Tungufell church was built in 1856 by carpenter Sigfús Guðmundsson.  The church now stands in a rectangular churchyard which was extended to north, west and south in 1958.  The churchyard was originally trapezoid in shape, narrower at the west and wider at the east.  The wall was built of rock; the east wall of the present churchyard was rebuilt in 2006.  Tungufell church is a wooden church of the older towerless form; this church type is also characterised by the eaves being directly above the side windows.  The church is one of the older ones of its kind in Iceland.  It was originally clad with wooden weatherboarding, which was tarred, except for the window frames which where probably painted white.  Inside, there was a coffered vault over the choir, influenced by that in Reykjavík Cathedral.  A low rood screen, farther forward than the present one, divided the choir from the nave.  The interior remained unpainted for some decades.

The church has undergone some change over the years.  In 1915 the church was for the first time painted inside and out.  The exterior was painted white, with a red roof and green window frames.  The interior walls were painted yellow, the ceiling over the nave in a pale colour, the choir vault blue and the pews brown.  The interior of the chruch has not been painted since, and remains in these colours.

In 1987 Tungufell church and all its goods were presented to the National Museum of Iceland.

Tungufell is thought to have been located in the midst of a settled area in the Middle Ages, as there were farms farther up into the highlands. The first record of a church here dates from 1200. The present church was built in 1856 and is among the smallest in Iceland. It is no longer used as a parish church and is owned by the National Museum. The frame for the altar piece, the altar, the pulpit and the hymn numbers board are the work of Ófeigur Jónsson and  are from the church built here in 1831.